Buzzfeed, Vice, The Guardian, Quartz and The New York Times: they all are considered role models – but do they deserve it? Lucy Küng, a research fellow at Oxford University’s Reuters Institute for the Study of Journalism and outstanding lecturer in our Master’s program, had a close look at the bunch of digital news operations in order to answer this question. Her analysis which “highlights precepts, concepts, and approaches which may be of value to other organisations facing similar challenges” has now been published (Innovators in Digital News) – there is no “recipe”, though.

Still, Lucy Küng identifies seven “interlinked elements” whose “power lies in their combination, in the virtuous circle that is created when all are present and function together”: 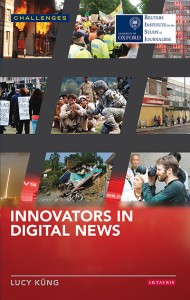 All quotes taken from Küng, Lucy (2015): Innovators in Digital News. London/New York: I.B. Tauris in association with the Reuters Institute for the Study of Journalism, University of Oxford. pp. vii-xi.