A Master’s Degree in Walking the Line

Posted on October 2, 2014 by patricia.kaefer

For imim the year ’13 was an auspicious one: It was a year ago to the day that the first cohort of students graduated. Originating from Austria, Malta, Romania and Serbia, the students, all of them media professionals, completed the academic part-time program involving interdisciplinary and intercultural team work. Over the course of their two-year study, they attended seminars in Austria, Germany, Spain, the United States and visited The New York Times, Huffington Post, Die Welt, Austrian Press Agency, El País and many more. 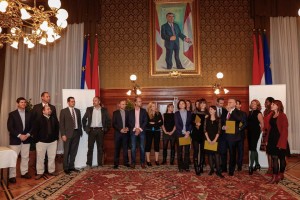 At the ceremony: imim students and graduates on Oct. 2nd, 2013, at Vienna’s City Hall.

In his speech at the graduation ceremony at Vienna’s City Hall, Wolfgang Blau, Director of Digital Strategy at The Guardian, encouraged the students to walk the thin line between keeping creative and open minds and, on the other hand, discharging their “thorough, but slightly boring” duties of managing their accomplishments.

Did it work out for them? Did they master this ambitious challenge?

“Well”, Dieter Bornemann, an imim alumnus of the first generation, says, “imim helped immensely.” Dieter is a journalist at the Austrian public broadcaster ORF and the elected spokesperson of his colleagues there. As part of one of his projects at imim he created a “social media academy” and introduced a set of social media guidelines for the ORF journalists. He graduated with a thesis on “The Future Implementation of a Multimedia Newsroom at ORF” for which he did a survey among 236 employees of the broadcaster. Besides influencing internal processes, Dieter presented his results twice at conferences of the European Broadcasting Union in Geneva and Paris and is an often invited expert in this field.

Generally, Dieter says that the program broadened his mind: Watching current trends as conveyed by lecturers or as seen in situ during visits to news organisations in, say, the U.S. opened up new perspectives for him. “Two years ago in New York, everyone talked about ‘mobile news’. The trend has only just reached Europe.”

The current cohort of imim students is scheduled to travel to the U.S. in November, for a seminar week at The Poynter Institute and visits of The New York Times, City University, Story Worldwide, Chartbeat etc. There will be many new perspectives to be taken in.